At the end of Trump’s recent State of The Union, Speaker Nancy Pelosi ripped up the speech which caused Secretary of State Mike Pompeo to post this picture on his Twitter feed. 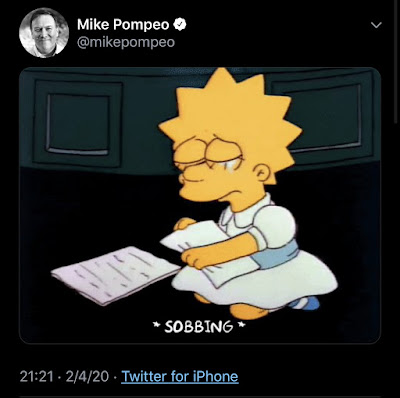 That picture is from The Simpsons episode “Mr. Lisa Goes to Washington.” Several people, including myself, have ratioed Mr. Pompeo by telling him that he has missed the point of the episode entirely.

Bill Oakley, a writer for the show in its early days, told him to disassociate himself from being a fan of the show.

Mr. Secretary of State please do not ever ever ever use Simpsons material in your twitter or watch the show or refer to it in any way pic.twitter.com/hY0EKfEbua
— BILL OAKLEY (@thatbilloakley) February 5, 2020

Yeardley Smith, Lisa Simpson’s voice since the character’s debut on The Tracy Ullman Show in April 1987, was blunter.

That’s pretty good! I might just add f*ck you @mikepompeo for co-opting my character to troll @SpeakerPelosi . Be a leader and fight you own fight! Oh, wait I forgot, you’re a follower. https://t.co/EzCtEZmKzJ
— Yeardley Smith (@YeardleySmith) February 5, 2020

Now to call myself a Simpsons fan is a bit of an understatement. On my external hard drive, I have the first 20 seasons, The Simpsons shorts, and movie. I went and saw The Simpsons Movie on opening night knowing full well that I had work the next morning.

So, if my Chief & LPO from the Vinson are reading this, you have your answer on why I was zombified the morning of 27 July 2007.

In one of my introduction level political science classes at UNT, we watched a couple of episodes. At this time, I have this as my pinned tweet expressing my feelings about the Trump administration.

Perhaps Mr. Pompeo hasn’t seen that episode since it aired more than 28 years ago.

Allow me to refresh his memory.

And if he wants, I would be more than happy to provide him a copy of it.

For those unfamiliar with the episode like Mr. Pompeo, here is a plot synopsis. (Some spoilers ahead)

“Mr. Lisa Goes to Washington” aired on 26 September 1991 on the Fox television network. It is the second episode of the third season and the 37th episode overall (out of 673 episodes that have aired so far as the show is in its 31st season).

Lisa wins a local essay contest and her family receives an all-expenses paid trip to Washington, DC. Lisa and three other contestants are in the running for the grand prize of $10,000 (today worth $18,800).

Some hijinks ensured on their trip.

The family meets their congressman who gives a boilerplate response to Lisa’s speech. 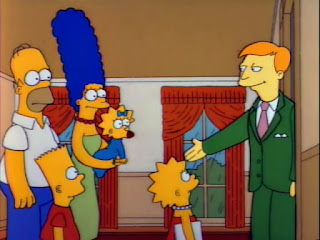 Rep. Arnold: Well, hi there. You must be Lisa Simpson.
Lisa: Hello, sir.
Rep. Arnold: Lisa, you're a doer, and who knows, maybe someday you'll be a congressman or a senator. We have quite a few women senators, you know. Lisa: Only two. I checked. (as of now it is 26)
Rep. Arnold: (chuckles) You're a sharp one. Well, how about a few pictures?

Lisa wakes up early on the day of the national contest to see the Winifred Beecher Howe Memorial. There, she sees her congressman take a bribe from a logging industry lobbyist who wanted a permit to chop down trees at Springfield National Forest.

The same National Forest where Lisa received inspiration for her speech. 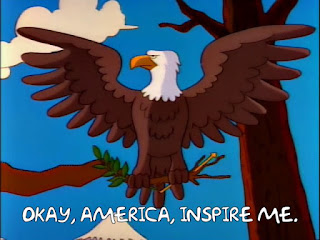 Lisa sees this & adding further insult to injury, the two insult the statue.

She realizes that she cannot deliver her speech as is because it would serve purposes that contradict its content as well being a lie. With her eight-year-old heart crushed and crying her eyes out, she tears up the speech.

Here is the speech that Lisa tore up, titled “The Roots of Democracy”

“When America was born on that hot July day in 1776 the trees in Springfield Forest were tiny saplings, trembling towards the sun. And as they were nourished by Mother Earth, so too did our fledgling nation find strength in the simple ideals of equality and justice. Who would have thought such mighty oaks or such a powerful nation, could grow out of something so fragile, so pure?”

Not as fiery as Nelson Muntz’s…

And certainly no “We the Purple”, but Lisa drew parallels to the trees growing at Springfield National Forest to the nation’s founding. Both the forest & the country faced its challenges, even times when it looked like it might not survive. Despite that, both have endured.

Unfortunately, Mr. Pompeo is part of an administration that is willing to sacrifice our ideals for the sake of achieving some type of short-term instant gratification instead of a lasting long-term investment. I can’t tell whether Pompeo is the congressman or the lobbyist because they are both going for the quick fix; the congressman for the rush of power or the lobbyist for the rush of making good on an investment.

And Mr. Pompeo should know better about surrendering our values given that he was trained as an Army officer at West Point where cadets are taught there are ideas and principles worth defending, fighting, and if necessary, sacrificing for them.

Perhaps he forgot them upon leaving the Army.

I may have been out of the Navy for more than a decade but I am willing to defend those ideas because *SOMEBODY* out there still believes in those ideas as highlighted in the montage of the other children earlier in the episode giving speeches at the Veterans of Popular Wars (stand in for VFW) Hall despite the degradation of those values by this administration and its defenders.

Facing a crisis of conscience, Lisa wanders the Washington Mall searching for an answer. She decides to ask Abraham Lincoln at the Lincoln Memorial only to find that people are asking him trivial matters.

Lisa treks to the Jefferson Memorial to ask Thomas Jefferson for advice. Jefferson doesn’t appreciate that he is the second choice given his accomplishments: The Declaration of Independence, the Louisiana Purchase, the dumbwaiter

In his defense, Jefferson might be a *TAD* miffed at Lincoln for issuing the Emancipation Proclamation & paving the way for the 13th Amendment to abolish slavery.

Lisa ends up at the steps of the Capitol as her epiphany morphs into a living political cartoon.

“The truth must be told”

Lisa arrives at the contest and forcefully requests to read a new speech to which the judge permits.

The city of Washington was built on a stagnant swamp some 200 years ago and very little has changed. It stank then and it stinks now. Only today, it is the fetid stench of corruption that hangs in the air.

And who did I see taking a bribe, but the “HONORABLE” Bob Arnold. But don't worry, Congressman, I'm sure you can buy all the votes you need with your dirty money.

And this will be one nation under the dollar...

… with liberty and justice for none.

Lisa’s “Cesspool on the Potomac” holds true today with the blatant corruption of the Trump administration that Mr. Pompeo has aligned himself with and the willful hypocrisy of its enablers on full display. Much like those at the awards banquet, Trump’s supporters boo, catcall, & shun those who are willing to speak the truth as it collided with their narrow viewpoints and warped sense of reality.

The episode ends with the system in action with the congressman being arrested and expelled from the House.

Unfortunately, we are stuck with Trump and his administration of sycophants for (hopefully) another 11 months as he took a disgusting victory lap after 52 Republicans voted to cover for his crimes against the Constitution which he swore to the best of his ability to preserve, protect and defend.

Of course, if you knew Trump, any promise from him is worthless to begin with.

The episode ends on a rather hopeful note. Trong Van Dinh, an East Asian immigrant, shares what his views of America as being the land of opportunity that has given his family.

When my family arrived in this country four months ago, we spoke no English and had no money in our pockets. Today, we own a nationwide chain of wheel-balancing centers. Where else but in America – or possibly Canada – could our family find such opportunity? That's why whenever I see the stars and stripes, I'll always be reminded of that wonderful word: “Flag.”

Miss Crowley, thank you for this oversized novelty check. I would like share this honor with all of my fellow essayists, particularly the courageous Lisa Simpson, whose inflammatory rhetoric reminded us that the price of freedom is eternal vigilance.

Earlier in the episode Lisa is struggling to find the spark for her essay by asking what would Benjamin Franklin say if he were alive today. At the Constitutional Convention’s conclusion at Philadelphia in September 1787, Franklin was asked what the delegates had created in Independence Hall.

Franklin, known for his brevity, replied, “A republic, if you can keep it.”

I think Lisa found the answer to her prompt with both “The Roots of Democracy” and “Cesspool on The Potomac.” Her first speech – a little more crowd pleasing – is the republic that Franklin said the framers established while Cesspool is the if you can keep it portion of the quote. The first three words of the US Constitution is “We the People” and it will take those that care enough, like Lisa was to expose her congressman for taking a bribe to cut down a forest, to cast Trump and his administration to history’s garbage heap of terrible ideas.

Her older brother Bart was certainly inspired by her words.

Even he – the underachiever and proud of it – got the point of Lisa’s speech.